Today is our last day in Costa Rica. In the last two weeks we went to Manuel Antonio, a beach town on the Pacific and explored San Jose quite a bit. Our classes will hopefully come in useful in the next month and I'm looking forward to being able to apply what we have learned. We will be flying out tonight and meeting out new host family in the morning! Information on San Marcos has been difficult to find but it sounds like a nice small town. To be honest, I'm pretty excited to be living away from the city, I'm not cut out for city life. It's going to be a very long night of travel and we won't be sleeping most likely. I am having mixed feelings about leaving Costa Rica, it will be difficult not to be around the entire group. It's been nice to have so many other students around and it's fun to meet up after class. Next month we won't see everyone until the conference on the last day of the trip. We just finished eating our last dinner with our host family so I need to finish packing and head out! Hopefully I can update soon in Honduras.
Posted by Hannah at 5:23 PM No comments:

So it turns out everything has been quite busy here. The last week has flown by! Last weekend, we went white water rafting, which was a lot of fun. It was a 4 hour bus ride but well worth it.  We had 6 people in each raft and the rapids ranged up to level 4. 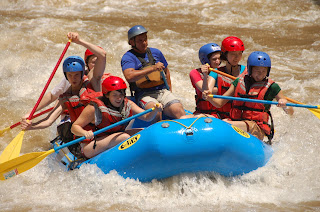 Our raft was doing pretty well through all of it until we got stuck on a rock and our raft completely flipped. 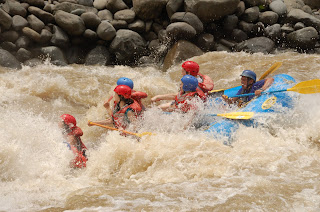 Here we are going down.... everybody fell off and another raft had to come rescue us before we hit more rapids. After our tumble, we had a nice lunch on the shore before finishing our trip.  We returned from the trip ready for our first day of Spanish class.

I was placed in the advanced class which so far has been going well.  I needed a little bit of a grammar review but the class is interesting because it focuses on many topics which I haven't ever learned in class.  In our lab we made a flashlight as well as a power supply and some variations on this circuit.

Thursday we had dance lessons which were a blast, we learned the Salsa, Merengue, and Swing. The dancing was a lot of fun but I didn't expect it to last as long as it did. It was a great experience though. On Wedneday, I started feeling sick so the end of the week was difficult but after sleeping excessively over the weekend I started to feel better finally.

Friday instead having class, we went on our first hospital visit. The hospital was over an hour away and was quite different from hospitals at home.  When we arrived, the staff gave us a presentation about how the health system in Costa Rica functions. All residents can receive treatment no matter what their financial situation is as long as they go to a public hospital (private ones are still expensive). The hospital had a nice butterfly garden that gave us all some energy in the morning, we were able to go in and many of the butterflies would land on you if you were still.  Many of the machines were similar to those that I've seen such as the x-ray machines but we also were able to see some behind the scenes equipment such as everything in the laundromat.  The washing machines and dryers were very large and there was an entirely separate room to load or unload the washer.  There was also a machine that could fold the sheets which was fun to see.  After a tour of the hospital we were able to look at some of the equipment which was not working.  Daisha and I looked at a heater for an incubator but we were not able to fix it because we didn't have a proper temperature probe.  The staff at the hospital was very knowledgeable and were able to explain the equipment to us as we worked.

On Saturday morning, we went downtown to catch the bus to Monteverde. The bus ride was almost 5 hours.  Upon arriving, we all split up and went on a two hour hike through the cloud forest. It was beautiful, the plants, the views, everything was incredible. The weather was great the whole time we were there and 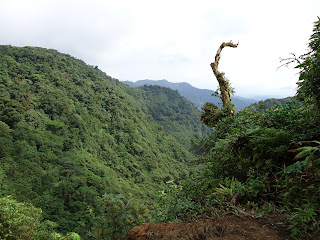 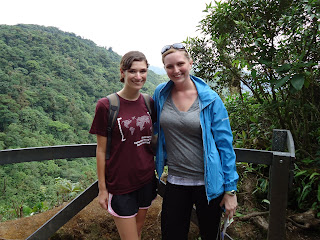 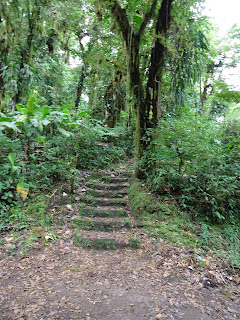 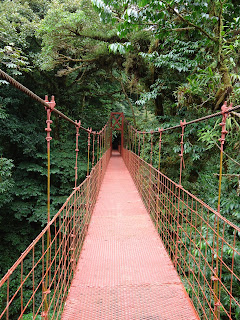 Sunday morning, we went back to the forest for ziplining.  It was an unforgettable experience, certainly not something I would have ever tried on my own. The views we were able to see while gliding through the canopy were so breathtaking, I'd definitely recommend it to everyone to try.  This week we will be talking with a biomedical engineer and visiting another hospital on Friday.
Posted by Hannah at 6:43 PM No comments:

Today we had a half day at school. We learned about electrical safety and in lab built an extension cord but we didn't have any Spanish class today. Being a chemical engineer I felt a little bit behind since I've only had basic circuit classes in school. Since we were out so early we did some more exploring. We went downtown and a few of us went out for lunch.  I ate just chicken for the first time and was surprised that I liked it, so far I haven't been a fan of anything with chicken in it.  I also had ham this morning for the first time in my life.  Definitely not my favorite, but overall not bad.  I think I would have been able to get by here staying vegetarian but I'm worried about keeping up my weight and getting enough protein to get through the long hot days.  I think it gives me more energy and is definitely better than living off salads like I do at school.  We did a lot of walking so I'm fairly tired now. Tomorrow we're going rafting which should be a lot of fun! But.....we have to be at the school for 6 am so we'll have to catch the bus around 5. It's still pretty early now so I'm not sure what we'll be doing for the rest of the day.
Posted by Hannah at 3:34 PM No comments:

I arrived safe in San Jose and have a wonderful host family. We live about 20 minutes by bus to where I will be taking my classes. We had the first day of class today and it was definitely a little intimidating. We had to be up for 6 today and my host mom made us coffee and we had cereal. I'm staying with Daisha as well as one other student, Sam. We all are in the same room so it's cozy but everyone here is great. Our family took us on the bus this morning to show us how to get to school. Once there, all of the students were able to finally meet, it's a great group of people. We all received a lot of cultural information which did worry me a bit... Being from a small town I've never really experienced living somewhere where I had to worry about walking around alone or having certain items with me so it will definitely be a big adjustment but hopefully everything will work out fine.

We had an introduction to the program and later an introduction to the lab section but got out of class early. We decided to explore the mall since it looked like it was going to rain soon (it rains daily). The mall was interesting to see, it was open to the street and had two stories of a food court. I was a little surprised by the amount of fast food chains here although I guess they've made their way around the world.  After the mall a few of us went out to socialize for a bit before returning home. It's not even that late (2 hours earlier than home) but I'm pretty tired. Tomorrow will be another day of long class and then we are going rafting this weekend and need to be at the school by 6 am. They don't have daylights savings here so it's already completely dark outside and only 6 pm. It's not as hot as I thought it would be, it's very humid but I was comfortable in jeans for the day. We do have internet at the house so I should be able to update often :)!
Posted by Hannah at 5:17 PM No comments:

In ten days, I will begin my two month long summer experience in Central America.  This is a program through Engineering World Health, an organization I have been involved in for the last three years.   In my first year of college I learned about the Summer Institute and it has been my dream to be able to participate.  My decision to study engineering stemmed from a desire to be able to help others through application of my major and this summer will be a chance to do just that.  The program will consist of repairing and installing equipment, training staff, taking inventories, and solving any other problems that arise.

After just finishing my semester at school, I am finishing unpacking only to start my summer packing in a few days.  We were given a packing list and I'm definitely nervous about having such limited packing space.  With a little over a week until I leave, I have been updated on all of my vaccinations, purchased my plane tickets, and have started reviewing my Spanish.  It's going to be a great opportunity to be able to use my Spanish, it's always been on and off practicing in school so while I'm sure it will be challenging to dust off the cobwebs I'm looking forward to the opportunity.

My first month will be spent in Costa Rica where I will have daily Spanish class as well as technical training.  I'm really excited to be able to apply some of the skills I've learned in school as well as to learn many new things.  The second month I will be in San Marcos Ocotopeque, Honduras shown below.

The hospital I will be at in Honduras is the Hospital San Marcos. It will be quite an adventure and I'm not completely sure what to expect.

I'm also very excited to meet my partner for the summer, Daisha.  She goes to University of Minnesota and I can't wait to be able to work together on our summer tasks!  I'm hoping to be able to keep everyone updated throughout the summer and hope to share the experiences that await me in Central America!

You can read more about the EWH Summer Institute here.
Posted by Hannah at 12:44 PM No comments: